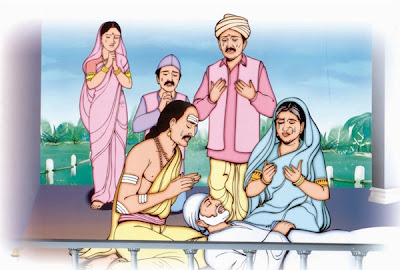 From Sai Satcharitra Chapter 44 and 45,where the author Shri Hemadpant had written-"Thirty two years before this, i.e., in 1886 A.D., Baba made an attempt to cross the border line. On a Margashirsha Pournima (Full moon) day, Baba suffered from a severe attack of asthma. To get rid of it Baba decided to take His prana high up and go into samadhi. He said to Bhagat Mhalasapti - "Protect My body for three days. If I return, it will be alright; if I do not, bury My body in that open land (pointing to it) and fix two flags there as a mark." Saying this, Baba fell down at about 10 P.M. His breathing stopped, as well as His pulse. It seemed as if His prana left the body. All the people including the villagers came there and wanted to hold an inquest and bury the body in the place pointed by Baba. But Mhalasapati prevented this. With Baba's body on his lap he sat full three days guarding it.

After three days passed, Baba showed signs of life at 3 A.M. His breathing commenced, the abdomen began to move. His eyes opened and stretching His limbs, Baba returned to consciousness (life) again.


From this and other accounts, let the readers consider whether Sai Baba was the three and a half cubits' body that He occupied for some years and that He left thereafter or He was the Self inside. The body, composed of the five elements is perishable and transient, but the Self within is the thing - Absolute Reality which is immortal and intransient. 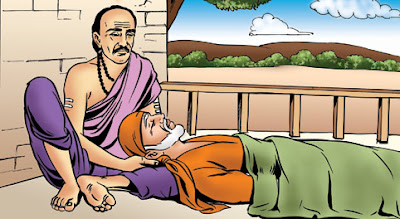 The pure Being, Consciousness or Brahma, the Ruler and Controller of the senses and mind is the thing Sai. This pervades all things in the universe and there is no space without it. For fulfilling His mission He assumed the body and after it was fulfilled, He threw away the body (the finite aspect), and assumed His infinite aspect. Sai ever lives, as also the previous Incarnation of God Datta, Shri Narsimha Saraswati of Ganagapur. His Passing away is only an outward aspect, but really He pervades all animate and inanimate things and is their Inner Controller and Ruler. This can be, and is even now experienced by many who surrender themselves completely to Him and worship Him with whole-hearted devotion.

PS:For devotees who do not know the meaning of the word Nirvikalpa it is provided here .
It is a sanskrit word and the meaning is as follows."Nirvikalpa samādhi, means absorption without self-consciousness, is a mergence of the mental activity (cittavṛtti) in the Self, to such a degree, or in such a way, that the distinction (vikalpa) of knower, act of knowing, and object known becomes dissolved — as waves vanish in water, and as foam vanishes into the sea. The difference to the other samadhis is that there is no return from this samadhi into lower states of consciousness. Therefore this is the only true final Enlightenment.
Posted by saisthanam team at Thursday, December 08, 2011

Email ThisBlogThis!Share to TwitterShare to FacebookShare to Pinterest
Labels: Celebrations