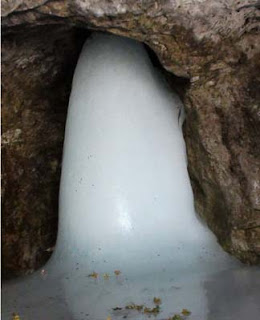 Holy Ice Shivling at the Beginning of Amarnath Yatra in 2011
Latest News about the Amarnath Shivling
Amarnath Holy Ice Shivling Melts Completely Before Shravan Purnima in 2011
The holy Ice Shivling that formed in 2011 at the Amarnath Cave Shrine has melted completely – confirmed by Amarnath Shrine Board. The most important prayer and puja and the arrival of the Chhari Mubarak is to take place on August 13, 2011 on Shravan Purnima day. The melting of the holy Ice Shivling before the final prayer on Shravan Purnima also happened in 2007, 2008 and 2010.
This year record number of devotees had the darshan of holy ice Shivling at Amarnath Cave – unofficially it is put at 700,000.
It is a miracle that the Shivling lasted this long because officially 615,000 people visited the Cave shrine in one month, starting from June 29, 2011.
As per devotees, when the Holy Ice Shivling Melts at Amarnath it means Shiva has returned to Kailash Manasarovar. The heat generated by the activity of more than half a million people is the main reason for the early melting of the Shivling. The only way to stop the early melting is to return to the original schedule of the Amarnath pilgrimage, which begins with the carrying of the holy mace of Shiva known as Chhari Mubarak.
The original pilgrimage to Amarnath is a one-month affair which begins on the Guru Purnima day (July middle) and ends on Shravan Poornima (mid August). But now the pilgrimage starts in June or early July, a month in advance, and there is widespread criticism that it is this early start that is responsible for the early melting of the Shivalingam.
Posted by saisthanam team at Wednesday, August 03, 2011